Olympus – The highest mountain in Greece

Olympus is the highest mountain in Greece and the mythical residence of the 12 Gods of Olympus.  It’s an international destination for visitors who want to explore it. Mytikas is the highest peak with an altitude of 2,918 meters and the ancients called Pantheon. The peaks are covered with white snow and remain for seven months from November to May and is ideal for hiking and climbing. The yearbook includes cultural, religious and sporting events.

More than 1700 species of plants existes in Olympus and up to 500 meters in altitude are deciduous trees and shrubs and climbing black pines and firs and higher coniferous forests with its rare Bosnian Pine. In 2.500 meters dominated undergrowth, depending on the season, with wild flowers.

Wild animals: deer, foxes, wolves, jackals, wild cats, wild goats. More than 100 species of birds with the rare woodpeckers and golden eagles. Also you will find many species of butterflies. 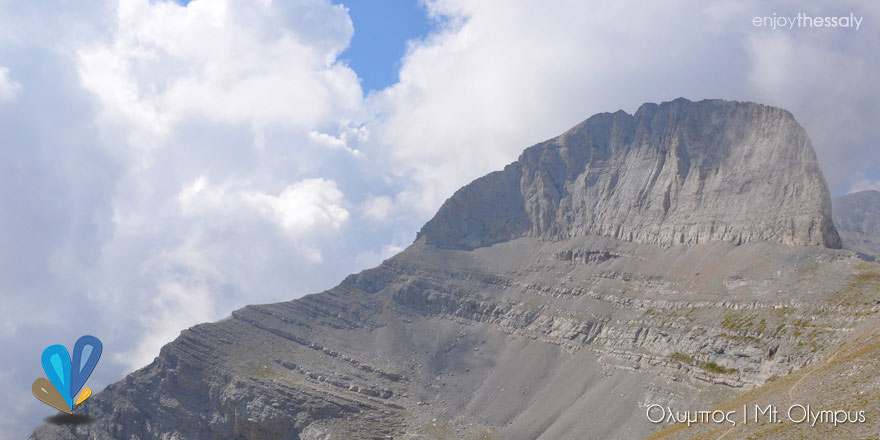 Six refuges are located on Mt Olympus. 5 of them are located at the eastern Olympus and the sixth is located at the SW side of Olympus at Vrissopoules accessible from Elassona. For refuges of eastern Olympus (Spilios Agapitos, Chr. Kakalos, Petrostrouga, Stavros, C. Apostolidis) you should drive to the highway E75 head to Litochoro of Pieria and then to position Prionia where the road stops and ascends the path to Spilios Agapitos. If you plan to stay to a hotel near Olympus the ideal stay is to book a hotel at Litochoro. Click here and see all available hotels in Litochoro. 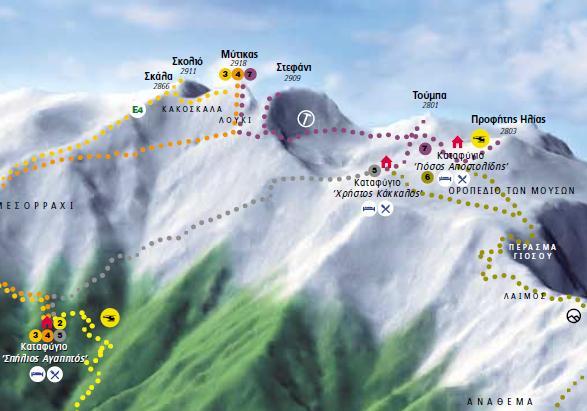 Refuge ”Spilios Agapitos” – located in ”Balconi” area, in height 2.100 meters in the heart of Mafrolongou, has 110 beds, water, electricity, phone 0030 23520 81800, heating and restaurant and is open from May to October 6p.m-10m.m. Park your car at Prionia (it’s near the village Litochoro) an then you have to walk about 3 hours to get yourself at the refuge. From Spilios Agapitos you will find trails to the peaks Mitikas, Scholio and Skala.

Refuge “SPILIOS AGAPITOS ‘- Skala – MYTIKAS (Duration: 3 hours, Height. Difference: 818 m. Medium difficulty, length: 3 Km)
From A- shelter “Sp. Agapitos “(2100 m) the trail ascends enough and about 20 below the ridge” Kraft Mesorachi “until he meets at 2480 m. Junction for” Zonaria “right. A few meters further up and left meets the path to Stafraities and Agios Antonios. Following the main path that is E4, bare alpine landscape with enough slope, after about an hour, we arrive at the top “Scala” (2866 m.) From there we continue following the red marks on the rocks, in the track ” Kakoskala “characteristically called because of natural steps leading to Mytikas. The route becomes more difficult from Skala to Mytikas. Note that this part of the route is quite difficult.

Refuge “SPILIOS AGAPITOS” – Luki -MYTIKAS (Duration: 3 hours, Height. Difference: 818 m. Hard and risky Length: 2,9 Km)
It was originally on the same path to last up to 2480 meters, where we meet the crossroad to Zonaria. We follow the path to the right, which climbs sharply at the beginning and then follow the folds of “Zonaria” for some time, to the point where it starts the feature “Lucky” that leads to Mytikas. Inside the “Leader” are features red arrows, on the rocks, showing the course. This route is particularly difficult – and in Luki dangerous due to landslides – and needs a lot of attention from the climbers.

Refuge “SPILIOS AGAPITOS” – PLATEAU MOUSON (Duration: 1 ½ hours Altitudinal. Difference: 550 m. Difficulty Length: 3,8 Km)
Going up from the shelter “Spilios Agapitos” to the peaks, the first few minutes of driving, we find a branch to the right, towards “Plateau of the Muses” (2650 m.) Where there are shelters “Yoshi Apostolides ‘and’ Christos Kakkalos”.
The trail called “butt” because it shortens the total ascent time on the Plateau of the Muses. It is quite steep in some places holding snow wants attention. Passes below the corresponding path of Zonaria.

Refuge “Chris Kakkalos” – located at the SW edge of the plateau at an altitude of Muses 2.648 meters, houses 18 beds, electricity, blankets, kitchen and water tank. Open from May to October.

Refuge “Stavros” – located on the East side of Olympus 9,5 km by paved road from Litochoron a height of 930m, in the forest of Dionysiou Monastery. Open throughout the year, mainly as a bar and restaurant and can accommodate 30 people. Tel: 0030 23520 81687 Accommodates up to 80 people, has electricity, water, fireplace and equipped kitchen. Open from June to October.

Refuge “Petrostrouga” – is 1900meters altitude. Accommodates up to 60 people, has organized kitchen, electricity, water, fireplace and is open all year. Provides organized medical equipment and radio emergency outside and inside the shelter. 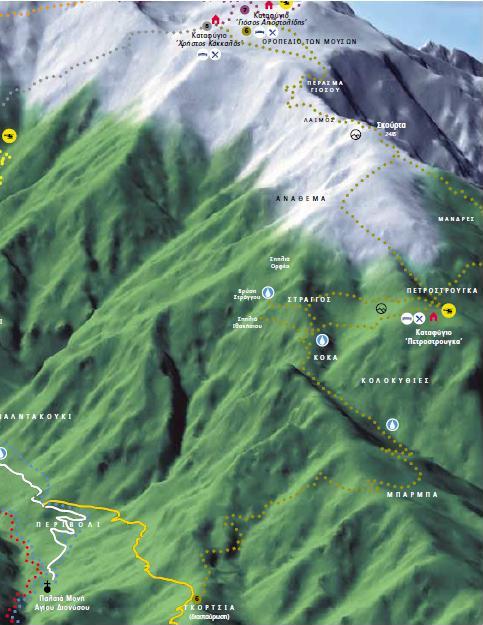 At the 14th kilometer of the route Litochoro – Prionia, on our right goes up a narrow road that leads to the car park. The site is called “Gortsia”. From here starts a wide path initially leads to Petrostrouga Refuge and later at the “Plateau of the Muses” and shelters “Christos Kakkalos” and “C. Apostolides’. 2/3 of the journey made within a beautiful forest while the rest is in an alpine landscape with low vegetation. Before departure it is necessary to supply enough water because the path there is no fountain with constant flow.
Continuing on the main trail, we arrive at the little “Petrostrouga” (2000 m.) Where there are spectacular perennial bushes. Then, going up enough, we reach the top “Skourta” (2485 m.) From where begins the Alpine landscape and the views in all directions are stunning. From here also starts a narrow ridge called “Neck” and ends at “Plateau of the Muses. Once we get to the top of the plateau, the path splits in two.
The left side leads to about 30 to the refuge “Christos Kakkalos” of EOOA at an altitude of 2650m., That serves 18 people and has a restaurant and right around 40 the shelter “C. Apostolides’ of Climbers Association Thessaloniki, at an altitude of 2760m., Which can accommodate 90 people and has a restaurant.
Starting from the two shelters, we embodiments short ascents on peaks Toumba (2801 m.) And Prophet Elias (2803 m.). Ascents can also do to the high peaks of Olympus following the path on the basis of “Stefani” leading to the “Zonaria”.

Route of Muses Plateau towards the peaks
Route A.
PLATEAU MOUSON (Cat. “Yoshi Apostolides ‘&’ Christos Kakkalos”) – Luci – MYTIKAS
From the Plateau of the Muses namely the shelters ‘C. Apostolides’ (2700 m.) and “Christos Kakkalos” (2650 m.) we continue our journey to the high peaks. The trail starts at both refuges.
After leave to our right the ‘Doors’, we continue our journey, passing just below the “Wreath” and reach the saddle between the two peaks. At this point, the left and in front of us in “Mytikas” and our right the “Wreath”. Follow the red arrows on the rock that lead us through the “Leader” to “Mytikas” 30 to about 40 minutes. The route is difficult in the “Leader” and often dangerous due to landslides.

ROUTE B
PLATEAU MOUSON (Cat. “Yoshi Apostolides ‘&’ Christos Kakkalos”) – PROPHET ELIAS – TUBA
Very easy are the routes from “Yoshi Apostolides’ to the tops” Prophet Elias “(2803 m.) And” Tuba “(2801 m.). It takes only 15minutes to enjoy breathtaking views over the plain of Pieria and “kettles” respectively. Worth worship and the highest chapel in the Balkans, the Prophet Elijah, located in the homonymous top and first built by Saint Dionysius the 16th century.

SW side of Olympus 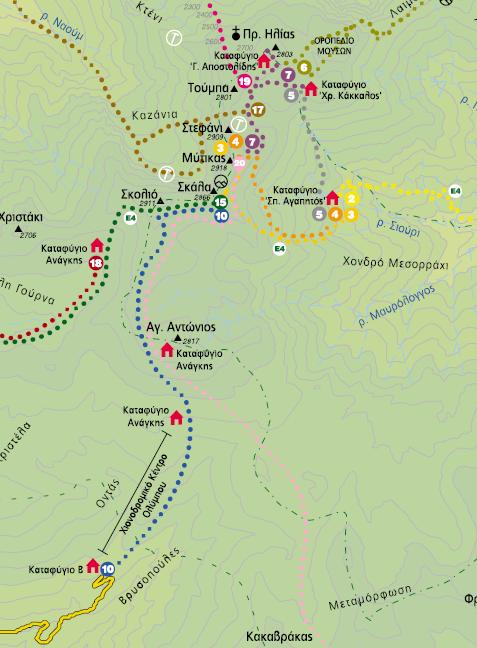 Refuge “Vrissopoules” – located west, behind the ravine of Mavratzis in place Vrissopoules 1.800 meters in height and is accessible by car from the area of ​​Sparmos. Houses 30 beds, kitchen, electricity, water and heating. Open all year but for the night required military permission since the refuge belongs to the camp of K.E.O.A.CH. Tel 0030 24930 62163.

To find yourself at Vrisopoules first go to Larisa then follow the road to Tirnavos-Elassona-Kokkinopilos. 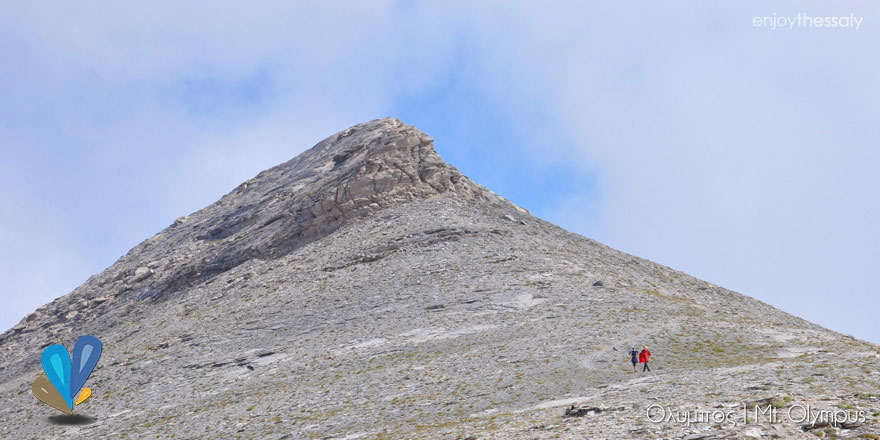 Rapsani – At the feet of Olympus

Rapsani is at the foot of Mount Olympus and is famous for its wine. Built at 500 meters altitude, Rapsani...