Alonissos Marine Park is an area of ​​particular environmental importance and was established in 1992 by presidential decree, is the first in Greece and the largest in Europe. The Park is divided into two zones, the first zone of strict protection where special rules apply depending on the status of the region, and the second zone includes the Alonissos, the Peristera and the islands Dyo Aderfia. You can visit some of them on boat. The flora and fauna of the ecosystem of the park is rich with many species of fish, birds, reptiles and also mammals. Monk seal, red coral, Eleonora, Aigaioglaros, the shag and the ibex of Gioura are some of the characteristics of species that exist in the region.

Seals Monachus monachus are 500 to 600 in number around the whole world. 50 of them live in Marine Park of Alonissos. The seal Monachus monachus is named like this because they prefer isolation of human presence. They are mammals and they born a baby per year, its length can reach 2.5 meters, weigh up to 350 pounds, they can reach the age of 45 years, they eat fish and octopus and live only in crystal clear waters. Island Piperi is the core of the Marine Park, it is strictly prohibited to approach closer than 3 nautical miles because the caves of seals. In island Kyra Panagia you can descend to the monastery, in Psathoura approach is allowed from sunrise to sunset, in Mandraki of Psathoura you can swim but not overnight, as in Skatzoura too. Diving is not permitted unless the free snorkelling. Professional fisheries is allowed and amateur fishing with trolling and angling. Must, however, snorkeling.

Don’t be sure that you will see seals, but you can see some dolphins follow your boat. The Park is also a major stop for migratory birds in spring and autumn. Small and large birds, not only seabirds, but tiny warblers and beautifully kestrels, go through the park in flocks as they move to and from the places of their proliferation in northeastern Europe.

More sights of the park is the cave of the Cyclops in Gioura, which are found the oldest traces of human presence in the Aegean Sea from 8.600p.Ch. – 4.000p.Ch. In Alonissos Blue Cave which is called Cave of Papanikolis, because it was their shelter og their submarine during the war, almost opposite the cape Paliofanaro in Peristeras island. The Lighthouse of Psathoura with focal height of 40 meters above the sea was built in the late 19th century and opened in 1895. This is an impressive stone building that currently works with solar energy is one of the highest in the Aegean with a height of about 29 meters and from 2001 as a listed monument by the Ministry of Culture.

The National Marine Park of Alonissos is a member of MedPAN (Network of Marine Protected Areas in the Mediterranean).

Book Now at the best hotels and rooms to let in Alonissos. 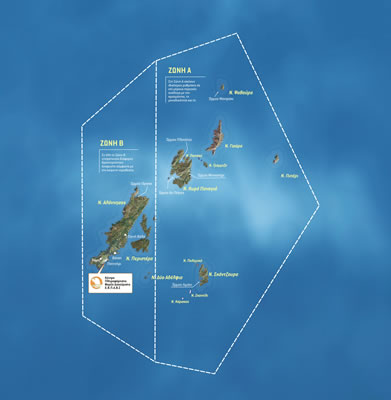 Caves in Prefecture of Trikala