Churches and Monasteries in Skopelos

There are several monasteries in Skopelos that you will find.

The monastery of Evangelistria is at the mountain Palouki. The legend says that a wealthy lord named Stefanos Dapontes lived in Skopelos. The monastery was built in 1712, in temple we can see the image of the Virgin which

is built in Istanbul, decorated with plants and animals as well as scenes from the Old and New Testaments.

We find On the left as we go up the mountain Palouki, with unique views of the north coast and Alonissos. Reminiscent castle as it has high surrounding wall castle architecture and was founded in 1648. The gilded wooden temple is famous with special style, floral decoration and vine and biceps eagles. Above the Beautiful Gate of the temple we see two performances ranges from 33 showing the 12 prophets and the Virgin Mary, and the remaining 21 Great Prayer and major holidays.

Located just 4 km. south of the city that is celebrated on February 25. Saint Reginos is the patron saint of Skopelos and served as bishop of the island, was martyred in 326m.Ch. on Julian the Apostate and tradition says he was beheaded in the location of the old bridge at the end of the main street of the harbor.

How not to say about this quaint chapel on the cliff with breathtaking views and 105 steps to climb to see it. Tradition speaks of a fisherman who saw a shining light, and in his sleep one woman revealed that there is a picture on the rock so the angler with the villagers went and found the image of St. John the Baptist. A must visit church while you stay in Skopelos. 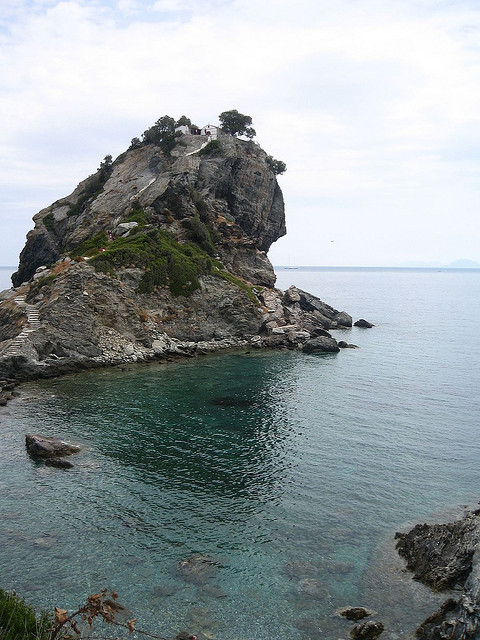 Skopelos, the green island. You will find over 170 hotels and rooms for rent in Skopelos that in summer are...

10 things to see and do in Skopelos

Dolphins near Skiathos and Skopelos (Pictures)